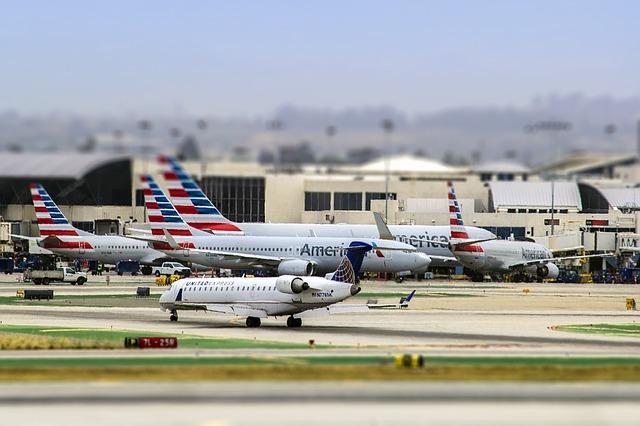 Almost a century ago, the City of Los Angeles transformed some of the fields outside the city into several unpaved runways. Some time later, in 1929, the first hangar was built and the airport received the official name Mines Field. This is how one of the largest airports in the world, Los Angeles Airport, was born. In the middle of the last century, the airport underwent a global reconstruction to accommodate jet aircraft of all types and directions. Since then, this small local airport has continuously expanded and today it is a huge state-of-the-art airport with nine terminals, which is the base for the largest US airlines. All terminals are connected not only by air and underground passages, but also by shuttles, which undoubtedly facilitates communication between them. Los Angeles Airport is considered the busiest in the United States, with an annual passenger traffic of about 90 million. While waiting for the flight, passengers can enjoy their rest in spacious halls, visit shops, banks, cafes. Free internet works great at the airport. Also there are more than forty offices for car rental. The airport is located less than thirty kilometers from the city, which is easy to reach both by public transport and by car. And the latter will only take 20 minutes. The United States of America is great for traveling by car. Two dozen car rental companies can give you a pre-booked car right at the airport. Take advantage of your trip to Los Angeles to capture the famous Hollywood sign. Only by car can you visit the most famous and most remote corners of California, such as Santa Barbara, Laguna Beach, admire the incredible coastal beauty and colonial buildings of the past centuries. If you are traveling with children, then a visit to Disneyland will certainly be included in your program. And the national parks with incredible lush fields of wildflowers will give you an unforgettable experience. Starting your journey in the Dreaming City, you will be able to develop routes in different directions, from San Francisco to Mexico. This will make your holiday varied and active.

Bookingcar offers a range of car rental options at Los Angeles International Airport
With us you can choose a car of any class that best suits your needs.
Our prices are one of the best prices on the market.
See for yourself!
Professional support
Our professional call center will help you understand all the intricacies of car rental. We guarantee full support throughout the rental period.

Other locations in Los Angeles:

We had a car with a mileage limit. It seemed unimportant, but in the end we rolled out much more, next time we will select a car with unlimited mileage.

A huge flow of customers and service is a little lame

A good selection of a cabrio

He did not regret that he took the car from the distributor, although for some reason he had bypassed his proposal for some reason. I recommend picking up cars here.